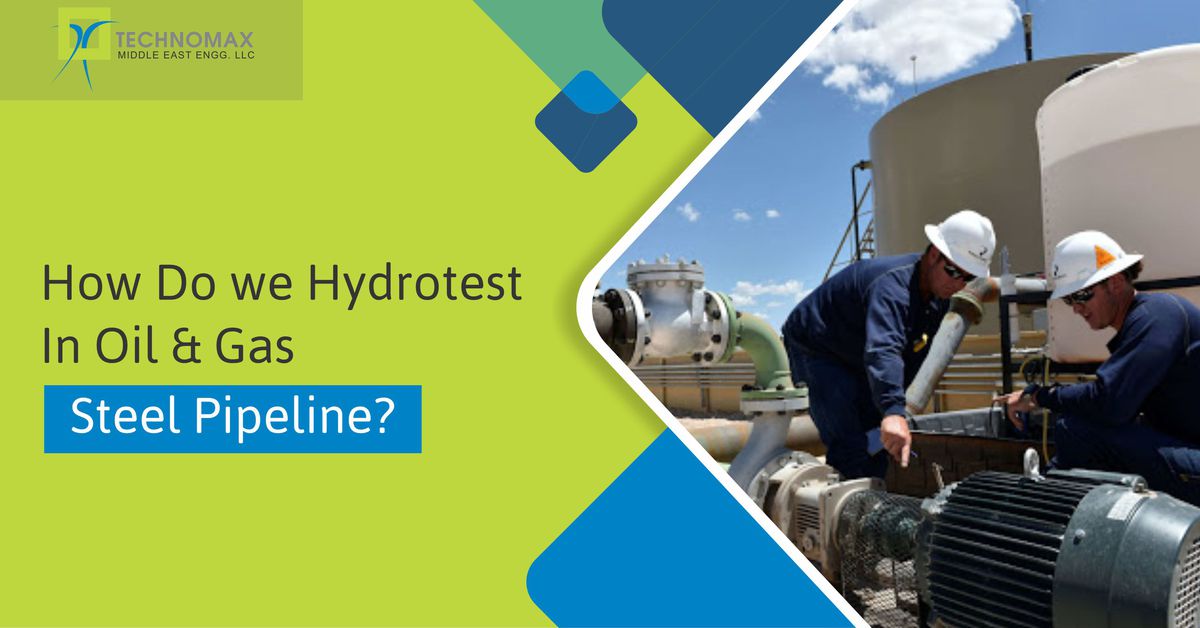 How do we hydro test in oil and gas steel pipeline?

The hydro test is usually used for post-construction testing of hazardous substances pipelines for liquids and pipelines for high-stress natural gas. In a pressure test, water inside the pipeline is pressurized by using specialized pumps to increase the test pressure water at a level above the maximum operating pressure of the pipeline. In this test, the pressure is maintained for several hours to ensure no leaks in the pipeline. Read more about Hydro Test in oil and gas steel pipeline.

Any indication of a leak requires identification and repair of the leak. The pipeline is then pressurized again, and the test is repeated. Operational integrity at the time of the weld, hydro test in the field, and even more important than the tube itself is guaranteed if the pressure test is completed successfully. Hydrostatic testing is widely used to periodically reassess the integrity of hazardous liquids and transportation pipelines.

It is defined in current federal standards on minimum pipeline safety are not integrity management crack tests, as has been demonstrated in many recent cracks in duct cracking. Inside pipeline evaluations using the hydro test, hydrocarbon products are moved from the section or sections being tested and replaced with water to minimize the risk of test failure and environmental damage resulting from leaks or breakage.

If a pipe successfully passes a hydrostatic pressure test, it can be assumed that it does not have any defects in the tube tested at the time of the hydro test. This is particularly important when dealing with pipe sections that are susceptible to cracking hazards, such as stress corrosion cracking or SCC, or break threats produced before about 1970 using low-frequency electrical resistance welding (LFERW) and longitudinal seam back welding (LW).

Experience has shown that, in some cases, depending on the operation, some seams, the pipe threatening to crack may be susceptible to breaking. Under pipeline safety regulations (subpart E of 49CFR§195), hydrostatic test Tubes for hazardous liquids require testing at least 125% of the maximum working pressure (MOP), for at least four continuous hours, and another 4 hours at a pressure of at least 110% of MOP if the tubing is not visible.

If there is concern about latent cracks that can grow due to a phenomenon known as "pressure reversals," then a test at the maximum pressure of 139% of the MOP can be conducted for a short period of about (1/2 hour). The peak test will serve to "clean" any cracks that may otherwise grow during pressure reductions after hydrostatic testing or as a result of short-term pressure cycles.

Studies have demonstrated its acceptability piping for extended service after an appropriate peak hydrostatic pressure test. Some factors would accelerate the growth of cracks, such as corrosion or aggressive pressure cycles. Hydro test pressure should also define the minimum and maximum pressure range on a parameter used for fracture mechanics evaluation—test pressures as a percentage of the specified minimum yield stress. The hydro test is considered to be one of the tests for condition monitoring services.

The hydrotest is one of the quality control measures and condition monitoring services used to protect the installed piping systems during condition monitoring services. The individual components of the pipeline for the planned benefits are an integral part of the design process. Hydrotest loads are one of the loads of an experience of the pipeline system in its useful life, and these loads are also considered in the project Law Suit.

For deep-water subsea systems, external pressure loads should be considered in the design to be consistent with fundamental physics. Hydrostatic conditions, both internal and external, are essential to determine internal and external pressure loads in all positions. All guidelines, industry standards, or RPs and design documents (including requests for authorization) must be explicit, whenever possible, about the definitions of the word "pressure." Wherever "pressure" is described, the position must be defined for the wellhead, at the inlet valve, or the flow line's deepest point.