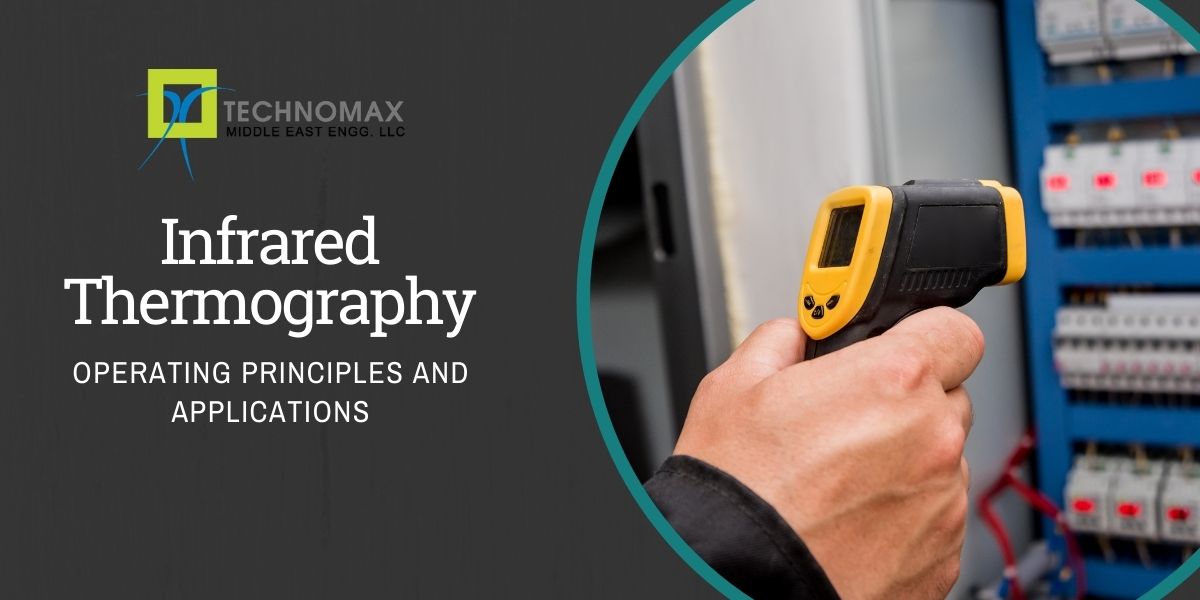 Principles and Applications of Infrared thermography

What is infrared Thermography?

Infrared thermography or simply thermography may be defined as a procedure that uses a long infrared range of electromagnetic spectrum ranging from 9,000 to 14,000 nanometers, to detect radiation and thereby create a thermal image of the same. Thermal imaging is also used as a tool in Predictive Maintenance. The images are known as thermograms. There are a number of benefits of Infrared Thermography. The technology of thermography has the capacity to see warm objects (such as humans and other warm-blooded animals), standing against a cooler background or environment. Thus it is extensively used for surveillance and other military and medical purposes.

The Operating Principles of Infrared thermography is that the infrared sensors tend to compute the temperature based on infrared radiation. It is a component of electromagnetic radiation, which gets emitted by every object at above zero degrees temperature. This radiation pertains in equal proportion to the intrinsic temperature of the item. The beams of the radiation emitted by the object are focused on a detector element through the optics in the thermographer. These electrical signals are said to be proportional to the radiation. These signals are then analysed and blown out so as to generate output signals which depict the temperature directly. The data received can surface on a computer screen or send to a control system via a connecting interface. The measurement of infrared temperature is based upon the law of Planck's radiation. It is directly correlated to the spectral radiation of a black body into space depending on its temperature and wavelength. Scientists have even deciphered the equation in a simplified manner as per Stefan-Boltzmann law. It helps in defining the relationship between the electric signal from the detector and object temperature.

The selection process of the appropriate technology of infrared thermography is guided by the idea that the minimum the measurement error of the operating wavelength, the more acceptable the technology is. The wavelengths are different for different types of object, and hence selection of optimal technology is dependent on the same. Let us state an example. In case of metal or any metallic surfaces, measurement of the temperature is done at a wavelength at the metal is relatively high emissive. Here, for the size of error should use the shortest possible length with respect to the actual wavelength of the metal. A standardised optimum figure is generally at a wavelength of 0.8-1 μm. Again for plastic, the optimal results is when measurements are taken at a wavelength where transmissivity of plastics is negligible. By testing the plastic material, the optimal wavelength can be reached. The range may vary from 3.43 μm for thin plastics to 14 μm for the thicker one.

Mentioned below are some of the applications of Infrared Thermography-

By dint of infrared technology, fast measuring and receiving precise temperature measurement, which is of utmost importance in the research and testing applications, has become a reality. The use of the infrared camera, infrared thermometer, pyrometer etc. have been extensively used by the research scholars to measure the temperature of individual particles in coal combustion reactors, so as to initiate an endeavour to understand the transient phenomenon behind combusting particles. This will, in turn, help in designing a new low-emission burner technology, so that the carbon footprints can be arguably reduced. This technology has been approved in the industrial environment as a qualified sensor technology that can monitor and control the temperature process.

The quality of 3D printing applications or finished products in injection molding is directly proportional to the temperature. It is an indispensable aspect to get the temperature corrected so as to make sure that the products manufactured are free of defects. It is incredibly helpful in the production of automobile parts where every slightest defect cannot be acceptable. To measure the temperature of the surface of the distribution products, the thermal imager is used through an online system. The technology can be synchronised with the PLC system, where assemblies which do not adhere to the standardised temperature range can be rejected automatically.

To maintain the overall health of the equipment and avoid any sudden damage or disruption in the production process, a thermal imaging camera is one that is the most coveted technology for such preventive maintenance. It can be used to detect hot spots in crucial process equipment, which can be repaired and restored in prior so that it does not lead to any catastrophic failure of the equipment or manufacturing process. It is also a cost saver.

The emittance of real objects can be successfully measured by thermography and can be utilised in various disciplines such as medical research, manufacturing, etc. It is a revolutionary technology that can also be implemented to ensure the overall health of the plant and machinery in a manufacturing unit.