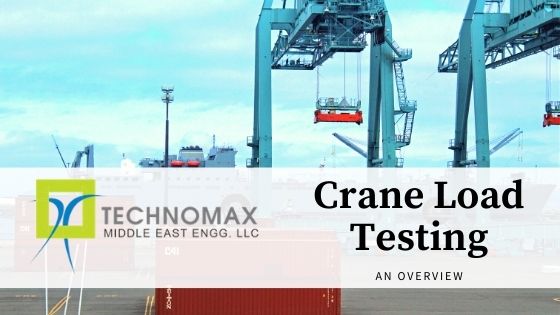 Crane Load testing is a critical tool for ensuring the safety of overhead hoists and cranes. It is described as "the process of applying a demand to a software system or computing device and measuring its response." It's commonly used to figure out how a device can behave under normal and peak load conditions.

What are some of the reasons why people have Crane Load Testing completed?

OSHA has defined the following standards:

Unless the manufacturer specifies otherwise, the test loads in a Rated Load Test cannot be less than 100 per cent or more than 125 per cent of the rated load power. These reports should be kept in a file such that assigned staff can easily access them. Inspection and load testing schedules are dictated by the equipment, frequency of usage, and environmental conditions. Regular or heavy use in an abnormal or nonstandard setting is referred to as extreme duty load monitoring.

The company's bottom line needs to prevent costly injuries and penalties. All performance and safety decisions have financial implications, and load testing is no exception.

When to conduct Crane load testing?

Military bases are frequently among those with their crane load testing procedures, independent of OSHA, LOLER, or anyone else's requirements. They complement their expertise by performing acoustic pollution checks and routine wire rope or part inspections. They don't want to produce a sheet of paper to meet the requirements; they want to learn everything they can about the crane.

While it's still a long way off, load testing may eventually lead to a point where the majority of crane owners are aware of their cranes' remaining helpful lifecycle.

Load tests aren't always created equal. Crane companies and end-users must carefully choose their testing partners. We advocate for only using load testing professionals; it's a specialized field. While this isn't always the case, be wary of, say, a mobile crane company that expands its service offering by driving around to test sites with solid weights.

A load test must be carried out in a safe environment. It must remain secure if the crane fails. There have been reports of companies conducting load tests while performing their regular lifting duties. This is a colossal blunder. Similarly, many of us in the industry have experienced crane load tests in which the operator has boomed out to manipulate the necessary test load. Wrong once more.

Water Weights were developed in response to the problems commonly associated with solid testing weights, as mentioned at the outset. Also, for more significant ventures, it usually arrives onsite with a single truck of equipment. Simultaneously, equivalent capability in solid weights will require several vehicles to get the package to the customer's front door.

Additional technical difficulties include gaining access to the crane and then rigging all below the hook. Few people consider the risk that the floor space underneath a crane (inside or out) would not handle the weight of concrete testing equipment. Consider the visual impact of 100 tonnes of steel or concrete. Water-based weights are rigged to the crane underneath a load cell and progressively filled with water.

The structure and properties of materials are linked to other issues. If concrete weights have absorbed rainwater, for example, they are heavier. Consider how this could affect a test. Meanwhile, with steel, there's a temptation to weld things together, which adds weight that wasn't planned for.

Water Weights comprehends the behavior of water bags and liquid, even though salt and freshwater are considered. It also investigates the elements and the atmosphere. That isn't a selling point, but it does serve as a benchmark for the degree of experience expected in all load-testing scenarios.

As a stand-alone service or in addition to our robust crane inspection services, Technomax provides high-standard crane load testing and certification. For more details or to schedule your crane load test and inspection, contact us today.

Also read- Crane Upgradation- Why should we do it?

How is oil analysis used for condition monitoring Services?