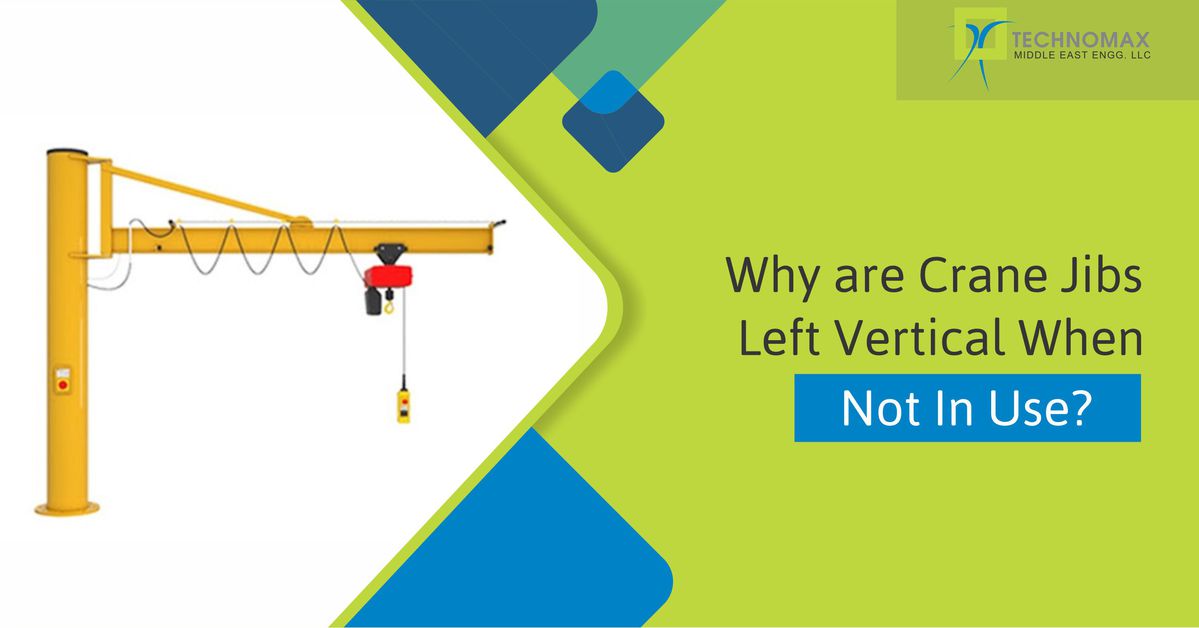 Why are crane jibs left vertical when not in use?

The crane jibs are not always vertical and, in many cases, would be in a dangerous position if left vertical. When they are left vertical, it is usually for more practical reasons. Do not assume that there is less force on the crane structure when the boom and crane Jib are almost vertical. Yes, the arm and the spear may see less force, but they are incredibly strong and designed to withstand forces far greater than their own dead weight.

What usually concerns us is the inversion of forces. In many configurations, the highest tipping forces occur when the Boom and crane Jib are at high angles with no load on the hook. This is because the counterweight designed to counterbalance a heavy load within a given radius creates an unbalanced condition as far as the crane installation is concerned.

In the case of a mobile hydraulic crane, the Jib can be stored in an almost vertical position in an urban area to save space. Lowering the crane Jib at a certain displacement, or even to the ground, can consume a lot of space needed for other deliveries or pumping operations. Folding and removing the clamp takes time, and leaving it assembled can save an hour or more every day.

The Jib can be stored in an almost vertical position for a similar reason; real estate. The upper part of the crane is left free to rotate with the wind. Since the tower crane is presumably located in a dense urban area, you will not want your arm to rotate on your neighbors' building or another tower crane in the same location.

In the operation manual of any crane, there is usually a section devoted to acceptable storage locations for various configurations and different climatic conditions. The manufacturer will specify items such as the appropriate arm and arm angles and when the top can be locked or allowed to turn or "twist."

Most commonly, in the crane installation, you will see mobile hydraulic cranes parked with a swing or folding arm stored at zero degrees to the main Jib. While this may be what we see most often, manufacturing more than likely allows for multiple angles of displacement, usually 0, 20, and 40 degrees. The parking configuration table in the manual will provide the appropriate jib angle for this shift and specify the maximum wind speed for this configuration. This is something we should know before crane installation.

Crawler cranes and mobile cranes with lattice jibs and wishbones can be stowed in a variety of positions, although they are not always vertical. You can see these large cranes with a nearly vertical 88-degree main jib with a jib offset of only 10–20 degrees when parked. A more conservative parking position is the "pocket knife" position, where the main arm is at a high angle, and the tip of the Jib is close to the ground. Technomax Provides services for crane installation in Abu Dhabi.

You can imagine similar reasons when considering how to store one of these large cranes. Much easier to get it to work on your website than to put it on the street every day. This will saves not only time and space, but also a skilled operator is required to get in and out of horizontal and knife positions.

Light on safety after crane installation:

A highly skilled operator is required to move large cranes in and out of approved storage locations. Many accidents occur when the crane is moved from an operational position to a storage position and vice versa.

• Evacuate the area located in the path of the boom and crane Jib as you move the crane to and from a parking position that is at least equal to the total length of the Jib and Jib.

• Be sure to always follow the manufacturer's approved procedures. Do not substitute the crane's software or safety features.

Check the local weather forecast regularly to check the surface speed and gusts for the length of time the crane will be stationary. I recommend the National Weather Service's local weather maps for you in the UAE.

• If using a hydraulic arm and a swing arm, consider fully retracting the Jib and placing it in a horizontal position. If a hydraulic failure occurs while the crane is not supervised, the crane Jib and Jib may fall, or the crane may become unstable.

• If using a parking position that is not listed in the operator's manual, consult the manufacturer's technical department for customs procedure and wind speed criteria.

When the Jib of a Luffing crane is somehow parallel to the ground, the weight of the Jib transmits a tipping moment on the crane. When the crane Jib is more vertical, the load becomes axial so that there is less stress on the entire system if left unattended when not in use. Also, the rotational force applied to the base of the crane is less if the wind blows. Tower cranes are usually left free to turn like a weather vane in the event of a wind storm. Technomax has earned a leading name in providing services for crane installation in Abu Dhabi

Let us first know what a jib crane is

A crane with a flat part known as blast or jib underpins a moveable derrick fixed to a divider, or a story mounted column is known as a jib crane. The jib is utilized generally in mechanical premises and on military vehicles that may swing through a bend, giving extra parallel development. It can, likewise, be fixed. The jib cranes can similarly be fitted on the highest levels of stockroom structures to lift products to all floors from the beginning to the top.

The jib is a working arm that expands on a level plane from the crane. The jib on a jib crane is an inclined swagger that bolsters a fixed pulley block. Links are folded on various occasions over the fixed square, and round another square is joined to the heap. The free finish of the association is pulled (physically or utilizing a winding machine). The pulley framework conveys power to the mound equivalent to the applied force increased by the number of lengths of links passing between the two squares. This number is known as the favorable mechanical position.

Generally, crane jib frameworks have an essential plan and development. Contrasted with workstation cranes and scaffold or gantry cranes, they're easy to work and require less upkeep since they have fewer parts that might breakdown or come up short.

The following are a portion of the parts and terms you'll see referenced all through this article:

It is the most widely recognized kind of jib framework since it very well may be introduced anyplace, including inside or outside. You can choose to use a detached crane jib framework under enormous extension crane frameworks or in open regions to help singular work cells. They can be utilized outside at marinas or stacking docks and inside for machining and getting together tasks, where you can use different jobs for organized activity.

There are three basic plans for detached jib cranes regarding how they can be mounted and introduced:

Foundationless jib cranes are unattached jib cranes that are piece mounted and darted to 6″ fortified cement for indoor use. These sorts of jib crane frameworks don't need an uncommon poured establishment and can be introduced anyplace in an office as long as the territory meets the maker's prerequisites.

While their simplicity of establishment, cost-adequacy, and convey ability to make unsupported jibs appealing for specific applications, they do have a much lower limit than common unattached jib cranes with a poured establishment.

There are two kinds of cantilever plan alternatives relying upon the sorts of overhead obstacles that could conceivably be available:

Divider mounted jib crane frameworks can be utilized in individual narrows, along basically satisfactory divisions or building support sections, or enhanced to a current monorail or overhead scaffold crane. The favorable fundamental position of utilizing a divider mounted framework is the space-investment funds that it offers. They don't need any floor or establishment uphold. Likewise, one can introduce them near the most reduced roof hindrance's underside, giving them the most significant leeway under or more the blast.

Divider mounted jib cranes can be intended to mount to a divider or building support section in two unique manners:

While these kinds of jib frameworks are among the most practical in cost and plan, the significant hindrance of utilizing a divider mounted, or section mounted jib crane is that the program doesn't consider a full 360° of turn. They also require an area or backing equipped to withstand the heaps, requiring an underlying designing overview and endorsement before establishment.

Contrasted with customary jib cranes with one blast, articulating jib cranes have two turn arms that can lift loads around corners and sections and venture into or under hardware and holders. The essential blast arm takes into account a 200° turn. The external component considers up to 360° of the pivot—giving a more noteworthy inclusion territory and greater adaptability closer to the pole or segment.

For more solemn and more continuous lifts, an articulating jib crane probably won't be the ideal decision. Their plan won't take higher limit lifts, and their range is restricted to some degree.

Introducing a jib crane, or a progression of jib cranes, can build creation and improve working environment security at your office by decreasing working environment wounds. They are also safe for crane operations. Jib cranes are wholly intended to deal with high-volume lifts and give an ergonomic method for moving material inside a work cell or related to a current overhead crane framework.

Remember the accompanying to ensure that you plan a jib crane framework that is the most affordable and generally beneficial for your application:

Obligation Cycle/Classification: Selecting the correct obligation cycle or administration characterization guarantees that the parts are sufficiently strong to withstand the heap and utilization prerequisites.

Stature Under Boom: The separation from the floor to the jib crane's underside's blast is the tallness under the explosion. Likewise, factor in crane size and lifting stature required.

By and large jib crane tallness: Factor in any connections, for example, electrical passage, so the crane will be liberated from overhead impediments.

The genuine working range required: The working (or snare) distance is generally the blast's length less ½ streetcar length at each end.

Force prerequisites: Will you need power for your jib crane's engine drive, its streetcar, derrick, or each of the three? Will the force supply be electric or air? Base or top passage? Indoor or outside use?